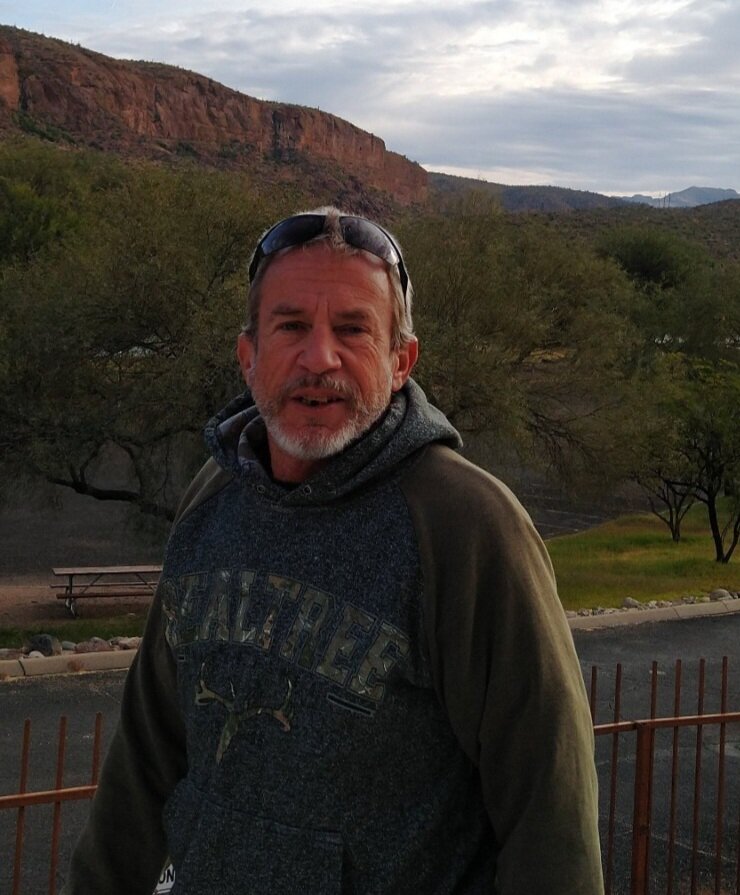 James Michael Sukach died unexpectedly at age 56 on October 31, 2022 at his home in San Tan Valley, Arizona. James was born February 1, 1966, in Augsburg, Germany where his father was serving in the U.S. Army's 24th Infantry Division.  His parents were Michael W. Sukach and Kathleen M. Sukach, both of Ypsilanti, Michigan.  James attended elementary schools in Milan, Onsted, and Adrian, Michigan.  He graduated from Adrian High School in 1984 where he had been a member of the Maple Leaf wrestling and golf teams.  James moved to Tempe, AZ and married Kimberly Eady, his high-school sweetheart and wife of 38 years.  They had two sons: Michael James Sukach and James Michael Sukach II.

James started working for Garrett Turbine Engine Company in 1985 as a turbine engineer.  He continued there until 1992.  He began working at Canyon and Saguaro Lakes after going fishing with his supervisor from Garrett.  He loved the beauty of the area.  James was offered a temporary position in 1993 to oversee the marina business at both lakes.  The position was made permanent and thus he began his new career as a marine boat mechanic.   He attended Mercury mechanics school in 1995, and achieved many marine boat mechanic certifications during his career at Precision Marine, as well as Customer Service Training in 1998.  James' professionalism led him to become part-owner of Precision Marine serving both Saguaro and Canyon Lakes. James became a part of the boating family when he attained part-ownership. Through his dedicated professional services, James has helped numerous people in the boating families of Canyon and Saguaro Lakes.   James' son, Mike Sukach, worked with him there.

In addition to his wife and two sons, James is survived by his parents: father and stepmother Sue Sukach of Michigan; mother and stepfather James Artlip of Texas.  Three brothers survive:  Robert, Andrew and Nicholas Sukach (Gracie) of TX; two step-sisters Andrea Weid of CO and Jamie Hartung (Seth), of WA. Also surviving are daughter-in-law Melissa Sukach and her son Angelo of Apache Junction AZ; and nieces Xiomara, Hope and Grace Sukach of TX.  One uncle survives, Jim Sukach (Becky) of MI, and one aunt, Joan Massey (Bob) of MI. James was predeceased by grandparents Marguerite and Walter Sukach of MI,  grandparents Owen Morgan and Laverne Wimer Harris of MO, step-grandpa Jack A. Wimer, and uncles George Sukach of IL and Jack W. Wimer of MO.

James achieved a personal goal to get his private airplane pilot license.  He was a member of the Cloud Busters Flying Club and enjoyed using their shared airplane for vacations with family.  He loved being adventurous with Skydive Arizona and Desert Skydiving Center, and enjoyed motorcycles and dirt bikes in the desert. James was an avid Grand Canyon hiker, enjoyed taking photos of scenery, going snow skiing, and spending time with long-time friends. He was dedicated to the outdoors and life, a fun-loving father to his children and loved seeing kids have fun on the water.  He liked going to beaches in California, Disneyland, Six Flags, and Hollywood Universal Studios with his family.

James was a wonderful husband and father who cared deeply for his family. He was known for his fun-loving charm, genuine smile, and kindness to others.  He will be missed by all who knew and loved him.  Donations in memory of James may be made to the charity of your choice.

A service to honor James’ life will be held Friday, November 18, 2022 from 7pm-8pm with a 6pm visitation at Falconer Funeral Home 251 W. Juniper Ave, Gilbert, AZ 85233.  He will be laid to rest at the Onsted Cemetery in Onsted, Michigan at a later date.

To send flowers to the family or plant a tree in memory of James Sukach, please visit Tribute Store
Friday
18
November